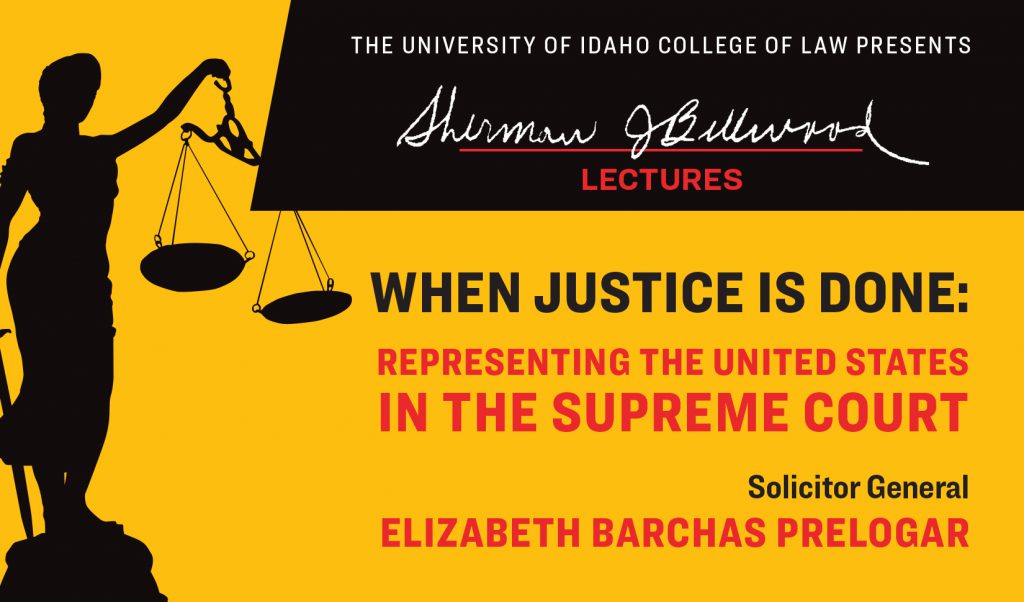 The Idaho State Bar, the University of Idaho College of Law and the Idaho Supreme Court

are proud to announce the 2022 Bellwood Memorial Lecture featuring

When Justice is Done: Representing the United States in the Supreme Court

The event begins with opening remarks Tuesday, September 6, at 5 p.m. MDT at JUMP Boise and continues with the annual lecture Wednesday, September 7, at 3:30 p.m. PDT in the Pitman Center in Moscow. Wednesday’s lecture and can be streamed live at uidaho.edu/live.

Both events are open to the public but your RSVP is requested here. 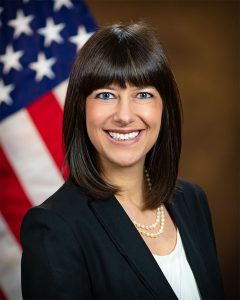 Ms. Prelogar previously served in multiple roles at the Department of Justice. Before her confirmation as Solicitor General, she served as Acting Solicitor General and Principal Deputy Solicitor General for nearly seven months. She also served as an Assistant to the Solicitor General from 2014 to 2019. In that capacity, she briefed and argued multiple cases in the Supreme Court and helped formulate the government’s appellate strategy in lower courts. During her prior tenure as a career attorney at the Department, she also was detailed to Robert S. Mueller III’s investigation into Russian interference in the 2016 presidential election and obstruction-of-justice issues, where she served as an Assistant Special Counsel.

After graduating from law school, Ms. Prelogar clerked for Judge Merrick B. Garland of the U.S. Court of Appeals for the D.C. Circuit. She then completed consecutive Supreme Court clerkships for Justice Ruth Bader Ginsburg and Justice Elena Kagan. After her clerkships, she worked as an associate in the appellate group at Hogan Lovells LLP. She later became a partner at Cooley LLP, where she focused on appellate litigation. Ms. Prelogar devoted substantial time to pro bono litigation while in private practice and also served as a Lecturer on Law at Harvard Law School, where she co-taught a course on Supreme Court and appellate advocacy.

Ms. Prelogar was nominated by President Joe Biden on August 11, 2021, was confirmed by the United States Senate and received her commission on October 28, 2021, and was sworn in by Attorney General Garland the next day. She lives in Washington, D.C., with her husband and two young sons.

Throughout his distinguished career, Judge Sherman J. Bellwood was committed to the legal profession and to legal education.  In one of his last and most generous contributions to legal education, Judge Bellwood endowed the Sherman J. Bellwood Lectures at the College of Law.  According to the terms of his will, Judge Bellwood’s purpose in establishing this endowment was “to enable the College of Law to invite and present person learned in the law to lecture on legal subjects from time to time.”

The Sherman J. Bellwood Lectures bring prominent and highly regarded local, regional, and national leaders to the state of Idaho and the University of Idaho campus. Past speakers include senators, Supreme Court justices, and a former United State Attorney General. Now split between its two beautiful locations, the Bellwood Lecture ties Moscow and Boise together and provides the current student body an experience unique to Idaho Law. This endowment is the largest endowed lectureship at the University of Idaho.